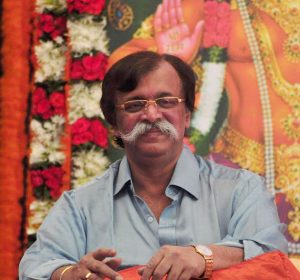 Dr. Aniruddha Dhairyadhar Joshi (M.D. Medicine – Rheumatologist), who is also most reverently known as Sadguru Shree Aniruddha Bapu is the sole inspiration, guide and motivator for us in this unique initiative.

One may wonder as to why an M.D. Medicine and a Sadguru who has a following that runs into millions would want to venture into the purely technical sphere of Ham Radios, the answer is not far to seek. Dr. Joshi is a multi-faceted personality whose knowledge and skill-sets encompass a vast spectrum. A post-graduate Allopathy doctor who has also achieved expertise in the field of Ayurveda and Homoeopathy, author, sportsman, painter, sculptor, exponent of the ancient martial arts of India, an intense follower of music of different genres, a dramatist having performed both on the Marathi and English stage during his college days, having deep knowledge of Indian folk music, who has himself conducted seminars for volunteers so as to introduce them to various new age topics viz. cloud computing, nanotechnology, quantum physics, swarm intelligence; the list goes on and on. As if this were not enough, he is also the executive editor of Dainik Pratyaksha a Marathi non-political daily, whose content balances the social, cultural and spiritual aspects, besides having a unique content of international news.

As early as August 2001, even before 9/11 had happened, Dr. Joshi had envisioned the need to set up a Disaster Management Cell, a concept that was way ahead of its times, that would in due course of time train volunteers who would respond to any disaster situation, whether natural or manmade. This project was formally made part of a corporate entity name ‘Aniruddha’s Academy of Disaster Management’ (AADM) in April 2005. Till date, the AADM has trained more than 84,000 citizens in the basics of Disaster Management, a week-long course, absolutely free of cost.

In March 2006, he wrote a series of articles on the Third World War, based on his detailed study and research of world history particularly the preceding two world wars. These articles were compiled into a book which was published in December 2006 along with the English and Hindi versions. He was perhaps the only person who at that time had cautioned and alerted the common masses about the impending Third World War. What may have seemed improbable to many of those who read the book at that time is now staring us in the face as a stark reality like never before.

Importance and relevance of Ham Radio

It is against this backdrop of a seemingly impending conflict that Dr. Aniruddha Dhairyadhar Joshi (Sadguru Shree Aniruddha Bapu) has decided to step up the state of preparedness for any eventuality that may occur. It is his firm belief that while the armed forces of our great nation will do all that is necessary on their part, we as responsible citizens also have a proactive role to play to back up their efforts.