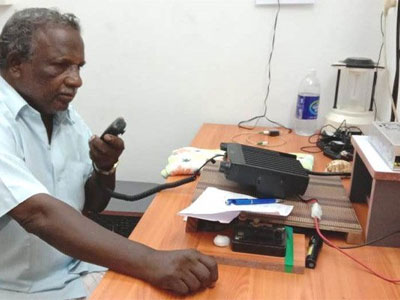 The beautiful islands of Lakshadweep have got its first local Radio Amateur recently. The new local Radio Star of Lakshadweep is Aboobaker from Kavaratti, its capital, who got the Amateur Radio Licence issued by Ministry of Communications, Govt. of India with the callsign VU3EBX. He is a retired Works Superintendent of the Public Works Department (PWD) there.

Lakshadweep is considered as a separate “Radio Country” by radio amateurs around the world and hence is eagerly sought after by them. Till now only those who got special permission from mainland India and foreigners used to operate occasionally from these Islands as DXpeditions. 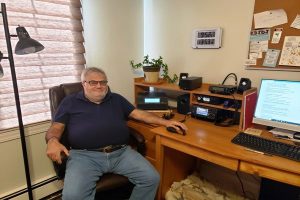 Aboobaker had interest in Amateur Radio for a very long time but could not get into it due to the logistics involved.

There was no facility for training in the islands and for the exam one had to go to the mainland. At last he got in touch with Subu, VU2NSL of Institute of Amateur Radio in Kerala, Kochi who trained and guided him with all the procedures. He qualitied in the Amateur Radio exam in the first attempt itself.

Although visiting hams to Lakshadweep are given temporary licenses with VU7 prefixes, Aboobaker was issued VU3 prefix being a permanent license. VU3 prefix is issued for licenses of mainland stations also. His license is valid upto 19 Apr 2038. After getting the license, Aboobaker set up an Amateur Radio station at his home operating on VHF.

It was installed by Sanjeev VU2MSA of Kochi who visited his home in Kavaratti along with other hams viz Subu VU2NSL and Balan VU2PEY. Though the VHF equipment was meant for short range communications only, he could communicate with stations on the mainland in Kerala over 400 kms away in good conditions. 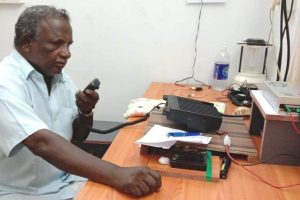 Information about this rare station from Lakshadweep was published in the famous “The Daily DX” bulletin, USA and also in “How’s DX?” column of QST Magazine, American Radio Relay League by Bernie, W3UR who got the information from Jose Jacob, VU2JOS of National Institute of Amateur Radio, Hyderabad.

Radio Amateurs are known for their friendship across the airwaves. Seeing the information in the “How’s DX?” column in August 2020 issue of QST, Alan, KB1DJ of Rhode Island, USA who is also retired, got the goodwill of presenting some HF Radio equipment to Aboobaker with which he can communicate all over the world.

He has been a ham for over 40+ years and has always looked for ways to give back to the hobby. In the past, he taught Amateur Radio classes, worked with Scouts and been active with HandiHams. He got in touch with Jose Jacob, VU2JOS who coordinated for the import of suitable equipment along with Sajeev VU2MSA.

Aboobaker has just received the precious equipment consisting of HF Transceiver, Antenna, Tuner etc. and now has to install it and learn the finer things of its operation. Aboobaker had to pay the Customs Duty for the equipment.

Thanks to the timely gift by Alan, KB1DJ Radio Amateurs around the world would be thrilled to contact the first local operator from Lakshadweep VU3EBX.