We are all aware that, nowadays, we can easily communicate using various apps through mobile phones and desktops. These apps also facilitate group calls and team meetings or webinars. Interestingly, at ARCAD, we have used the period of COVID-19 lockdown to explore and fully utilize these modes of communication.

But these modes are of no avail if there is no electricity, if the mobile phone battery goes down or even if there is no internet or cellular network connection. A person may not be able to remain connected during such situations; particularly in the case of disasters such as earthquakes, floods, cyclones and the like, where large areas are affected.

…and this is precisely where the Amateur [Ham] Radio plays a significant role!

Paradoxical as it may seem, a seemingly ‘vintage’ technology such as that of the Ham Radio, actually has the capacity to rise above all the latest technologies, which are rendered useless in certain disaster situations, and become a lifesaver. A Ham radio operator always carries his ‘Handy’ (handle-held device) with him. In such disastrous situations, he rescues not only himself but also others seeking help. By getting in touch with his Ham friends on a particular frequency, he can get himself and others to safety.

Now, you must be wondering what exactly a Ham Radio is?

A Ham Radio is a two-way communication device; just like a walkie-talkie. It has its own antenna, a base unit and a handheld microphone unit.

To start the communication, one has to tune in to a particular frequency. A Ham Radio set has a microphone connected to it. It is necessary that a person on the other end too should have a Ham Radio. The communication established using radio waves. Ham Radio is also available in portable form, i.e. a Handy, which is just like a walkie-talkie and has a base station with an antenna set up at your place. 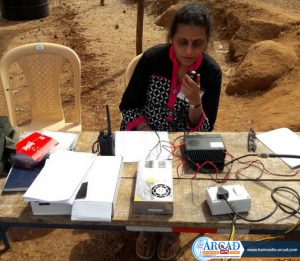 Ham radio is used mainly at the time of disasters. When everything stops, Ham Radio is still ON. During disasters, the Ham Radio operators are busy with rescue work.

Initially, Ham Radio was a hobby. Even today, many people use it as a hobby. However, nowadays, more and more people are utilising it for disaster support. To become a Ham Radio operator, it is mandatory to get the license by passing an examination conducted by the designated government authority. In India, it is the Wireless Planning and Coordination Wing (WPC), a division of the Ministry of Communication and Information Technology which regulates Amateur Radio. In India, any person above 12 years of age is eligible to appear for the exams. There are 2 grades one can secure after passing the examination – General Grade and Restricted Grade. The one which features Morse Code is General Grade while the other without Morse is the Restricted Grade.