During the early days of radio, frequencies within 30 MHz were considered ‘high’ frequencies. The understanding as well as the component construction, at the time, limited the communication equipment from going to higher frequencies. Over the course of time, new concepts like skin effect, parasitic effect, distributed elements, etc. were understood, which allowed engineering components suitable for even higher frequencies. The semiconductor development definitely helped reduce the power requirements and miniaturized a lot of radio communication equipment. As a result, the frequency envelope could be pushed into VHF and UHF regions, which extends all the way to 3 GHz. To give a sense of reality, the world is fast pushing the frequency envelope into the Terra Hertz region of the frequency spectrum. We are already at a point where microwave and millimetre wave components are becoming common and easily accessible to an amateur. 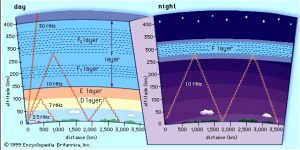 Over the years, physicists and engineers have observed and studied the behaviour of radio waves at different frequencies. For example, reflection, diffraction, refraction and dispersion are the most observable properties of radio waves, including light. It does not matter if you are in the HF band or the UHF band. These four properties apply, no matter the frequency. Yet, the outcome of those properties is totally unique for different frequency bands.

The HF band is known for its huge antennas which is due to the long wavelength ranging from 3 MHz all the way up to 30 MHz. We are looking at a wavelength that ranges from almost 100 meters at 3 MHz to just 10 meters at 30 MHz. Raindrops and dense clouds hardly affect the propagation of these radio waves. Surprisingly, the most unforeseen element of nature affects it extensively. It affects it so much that every 7 to 8 years, communication over the HF band becomes a real challenge. The HF band stays active when the sun has beauty spots on its face! Its usability reduces the moment sun hides its beauty spots. As far as we know, the sun likes to hide them for a few years in a decade. Keeping humour apart, the sun follows a cycle. There are periods of activity when the number of sunspots is very high. There are coronal mass ejections that ionize the Earth’s ionosphere to a great extent. A few years later, the sun becomes inactive, and we are left with no sunspots, no corona ejections, and as a result, a weak ionosphere. The density of the air in this ionosphere varies as we go higher in altitude. A change in density leads to a change in refractive index, which results in the bending of electromagnetic waves. The frequencies affected the most are those in the HF band! 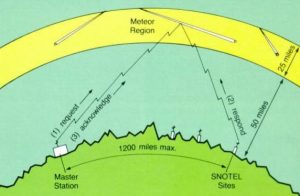 Since the ionosphere is so sensitive to the Sun, it changes every hour of the day. Also, as we saw earlier, it changes every year depending on the phase of the Sun. When the Sun ejects a significant amount of ionizing radiation, we are in for a treat. There have been reports of communications happening halfway across the globe with just 5W of radiated power. Practically, you can communicate with anyone anywhere in the world if the sunspot activity is high! If the Sun decides to take a nap, i.e. when sunspot activity is less, we end up struggling a lot.

As we go to higher frequencies, such as the 50 MHz band, things change a lot. The wavelength now reduces to 6 meters. Reflecting from ionosphere becomes a little difficult but not impossible. It simply needs dense ionization. So, skywave communication on 50 MHz band is rare. Although there is another interesting phenomenon which this frequency can take advantage of — the ‘meteor burst scatter communication’. When meteors from space enter Earth’s atmosphere, they break and leave an ionized trail behind. This ionized trail covers a small part of the sky, but it is sufficient for communication to take place. Radio waves can bounce off this patch of the ionized trail and reach faraway places quite easily.

Further, up in the frequency, we come across the FM broadcast band, the aviation band, weather satellite band, the 2-meter amateur radio, the VHF TV broadcast and military communication spectrum. The VHF band extends all the way up to 300 MHz. In terms of wavelength, we are looking at 10 meters at 30 MHz and 1 meter at 300 MHz. The amateur radio band sits just around the middle of the VHF band at 144–146 MHz. Just below it lies the weather satellite broadcast band around 137 MHz. The antennas are relatively smaller as compared to the HF band. As the wavelength reduces, the electromagnetic waves start getting affected by the objects that come into its path of propagation, e.g. mountain tops, foliage such as bushes, trees, etc. Sharp mountain tops and edges often lead to what is known as the ‘Knife Edge Diffraction’. 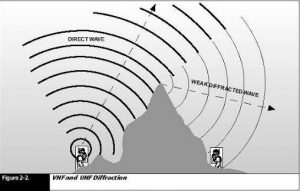 Then, we also see diffraction of the waves due to various objects coming their way, which is very common in the VHF and the UHF band. The four properties we spoke about earlier, influence the propagation to a great extent as we move up in the spectrum.

Objects such as buildings can easily block radio waves of the VHF and UHF bands. But most of the times, these buildings have openings. The windows act like apertures through which the radio waves diffract and keep moving forward although with slightly lower power.

Tropospheric propagation is another interesting phenomenon experienced with the VHF frequencies. Earlier, we saw how the Ionosphere refracts HF radio waves and sends them back to the Earth. Similarly, the temperature inversion during summer can cause radio waves to bounce and propagate long distances. Normally, the temperature reduces with altitude. If you happen to be near the coastline, the air near the surface cools faster as compared to the air higher up. It leads to change in refractive index resulting in radio wave reflecting from this temperature inversion layer. 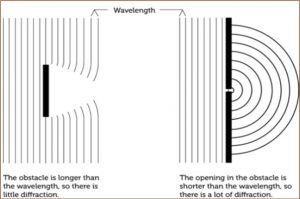 Ionospheric propagation becomes less common at these frequencies but not totally absent. There are times when highly ionized clouds of air form in the upper atmosphere. These dense clouds are capable of bouncing VHF frequencies. Such propagations are known as sporadic E propagation because they occur totally randomly in different parts of the sky. Again, it is dependent on the weather in outer space.

The UHF frequencies start to become interesting where the wavelength is under a meter long — ranging from 1 meter at 300 MHz to 10 cm at 3 GHz. A lot of interesting things happen here. It is by far the most crowded radio spectrum we find. At the lower end of the spectrum, we have some military communication bands. Further up, at 435 MHz, is our amateur radio band. Then comes the TV broadcast band which is about to be reused for 5G communication. A large part of lower UHF is used for military and TV broadcast. Just around 700 MHz, we start seeing mobile communications. The mobile phone spectrum can be observed all the way up to 960 MHz. The GPS and lot of other navigation satellites transmit in 1.17 GHz up to 1.6 GHz. The commonly used Wi-Fi also operates in the upper UHF band. Military radars and communication also operate in this UHF spectrum. Apart from that, a large part of the spectrum also got allocated to the 4G LTE communications. Weather satellites also relay high-resolution images in this spectrum. Radio astronomers are able to observe the hydrogen in the Milky Way by listening to the 1.420 GHz frequency.

The UHF band is unique because there is a transition from decimetre into centimetre wavelength. Also, a lot of components behave differently in the lower UHF band as compared to the upper UHF band. For example, a 10 nF capacitor will still appear like a capacitor at 400 MHz, but it would behave like an inductor at 2.4 GHz. The concept of parasitic elements and distributed elements become dominant in the upper UHF spectrum.

The lower UHF frequencies such as the 435 MHz amateur radio waves can propagate by means of diffraction and reflection in the urban environment quite easily. The upper UHF amateur radio band at 1.2 GHz will face severe attenuation and loss in the same scenario.

The journey becomes even more exciting when we go beyond the UHF band but again, that is something for some other time.